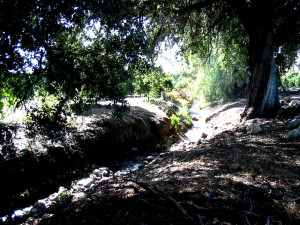 After 27 years, it was finally a reality: The Redlands Emerald Necklace!

The Emerald Necklace concept was created in 1987 in Redlands by a citizen committee that wrote the report titled “Redlands Park and Open Space Plan”, dubbed by everyone who care The Emerald Necklace. The committee envisioned a swath of green – citrus groves, parks, natural open space, San Timoteo Canyon and Creek, Santa Ana River wash – that would encircle the City of Redlands, defining it from neighboring towns and providing it with a setting unlike that of any other town in the inland area.

The plan was incorporated into the 1994 General Plan, and citizens voted Measure O to fund the City’s acquisition of land for the Emerald Necklace pieces. Still, the Emerald Necklace remained difficult to define, until Redlands Conservancy launched the first Emerald Necklace Grand Tour in 2014.  With a Grand Tour of motorists, bus riders, and over 200 bicyclists, the event introduced Redlands’ residents and visitors to the sites and smells of the swath of green that (mostly) still surrounds Redlands.

Today, the Emerald Necklace Trail and Scenic Route is celebrated with the 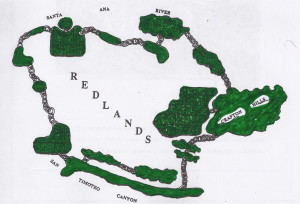 Annual Grand Tour on the third Saturday of February, and in a full-color map which lists all the sites, turn-by-turn directions for cyclists and motorists, and all the supporting businesses that provide the feast of treats and beverages for the Grand Tour.

Organizers are working with the City of Redlands to establish way-finding signs and site signs to help “tourists” find their way around the Emerald Necklace, and to all the “gems” along the way.

For an interactive map of Redlands trails and driving tours, including the Emerald Necklace Trail and Scenic Route, click here.